News Apr 08th, 2019
On the approach toward the Tail of the Dragon, the GLI was smoother, quieter and a touch more mundane than a GTI would be. We stopped in to gawk at the Tree of Shame, then headed up the road. A sport bike zipped around us, crossing the double-yellows…

From The Globe and Mail

Standing front and centre in the forecourt of the Deal’s Gap Motorcycle Resort, the Tree of Shame’s trunk and branches are festooned with bent and broken pieces of steel and bodywork. Act the fool around here, and a dragon is going to chew you up and spit out the bones.

To be precise, it’s the Tail of the Dragon that tears the unwary apart. A whip crack of a mountain road, U.S. 129 snakes through 318 corners in 18 kilometres, edged by steep drop-offs and unforgiving tree trunks. It’s the kind of place that’ll shake a parts-bin car into its constituent pieces.

On the face of it, this road should make the Volkswagen GLI nervous. With the latest-generation Jetta now riding on the company’s new MQB modular architecture, VW has thrown together an assemblage of go-fast bits in an effort to create a little excitement. The GLI now shares its engine and transmission with the Golf GTI and gets the same front-brake rotors as a Golf R.

However, the GLI is not just a GTI with a trunk. It’s got a 50-millimetre-longer wheelbase and is approximately 80 kilograms heavier. In their base models, the Golf is frisky and fun, while the Jetta is a more buttoned-down commuter.

In the Canadian market, the GTI and Golf R are far more relevant than the GLI, which barely makes up 5 per cent of Jetta sales. Further, VW – which relies heavily on sales of its Tiguan and Atlas to keep profits up – is planning to add a new small crossover to its lineup shortly and is preparing for a large push into vehicle electrification. The company could really have phoned in the GLI’s performance as an afterthought.

On the approach toward the Tail of the Dragon, the GLI was smoother, quieter and a touch more mundane than a GTI would be. We stopped in to gawk at the Tree of Shame, then headed up the road. A sport bike zipped around us, crossing the double-yellows just before the first corner. The GLI went after it like a cat after a canary.

In Sport, the most aggressive of the available driving modes, the GLI’s thick-rimmed steering wheel offers well-weighted, accurate steering. A brake-based torque-vectoring system on the front wheels is basically a cheat code for enhanced turn-in, and the Jetta’s longer wheelbase barely registers on these narrow roads. The new multilink rear suspension keeps the rear end planted on rougher sections of road. 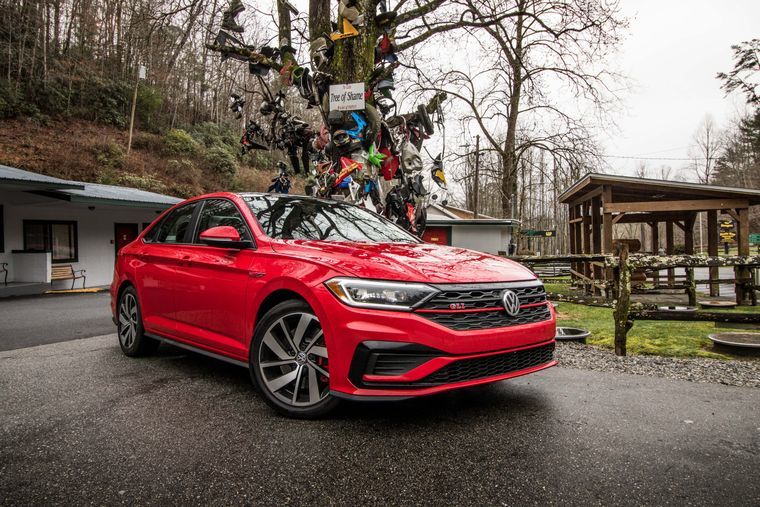 All GLIs are shod with well-balanced Hankook Ventus S1 evo3 tires on 18-inch wheels, and they dealt with wet patches of tarmac without upset. Road noise is much quieter than in something such as a Subaru WRX, but the GLI is still very quick. Along with its extra length, the GLI has a slightly wider track than the GTI; it’s less frenetic, but very eager all the same.

On the Dragon, our knee-dragging motorcyclist must have been surprised to see a fairly generic-looking compact sedan cheerily keeping up. As with the current GTI, the GLI doesn’t require tire-squealing heroics to get the best out of it – just smooth, easy inputs. It’s a great deal of fun, certainly much more than you’d expect from such a plain wrapper.

The smooth-shifting manual gearbox is a little more involving to drive than the seven-speed dual-clutch gearbox, although the latter was quicker when the road got very technical. Neither feels like the soft option – just pick your favourite flavour and enjoy.

Is the GLI a better blend of practical and fun than the GTI? Not really. But it is a little quieter, a better highway commuter and a better value. The GTI has a lower starting price, but the GLI comes standard with keyless entry, navigation, a power moonroof and a leather interior. It’s thousands less than an equivalent GTI.

Spacious and comfortable, fairly priced and well-equipped – and also capable of slaying a dragon or two. Fans of fast Volkswagen four-doors, take heart: The new GLI is greater than the sum of its parts.